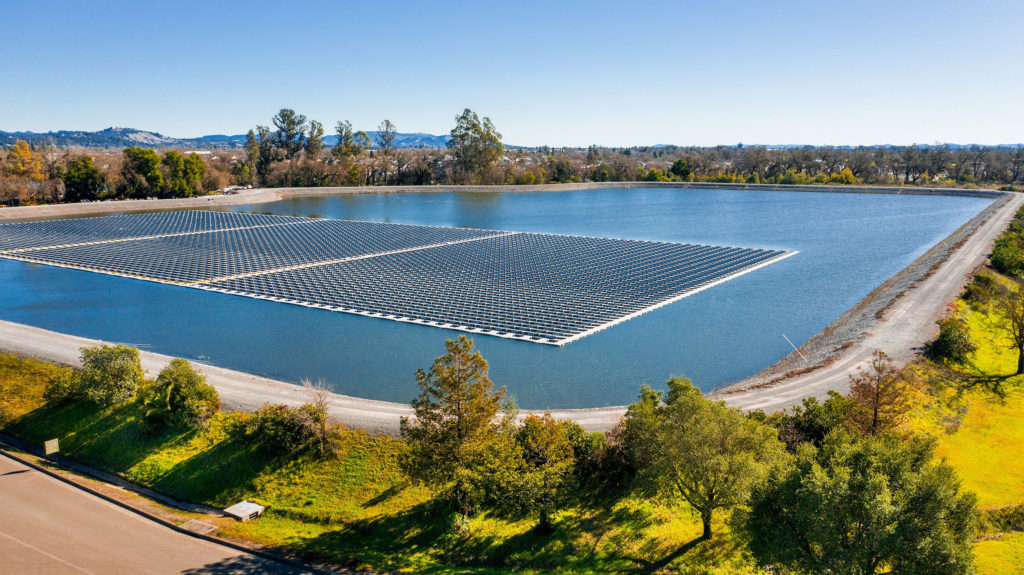 North of San Francisco, in the heart of Wine Country—where land is at a premium—there’s a large pond partially covered by nearly 5,000 solar panels. This massive floating solar array has been installed to power the town of Windsor’s water treatment facility. The largest such project in California, the novel solar array produces 1.8 megawatts of electricity—meeting 90 percent of the water treatment facility’s power needs. In addition to producing clean power, the solar panels also deliver 30 percent energy savings, helping Windsor control its energy costs. With solar power forecast to soar in the midst of the climate crisis, the project shows how sustainably minded public entities and innovators in the private sector are joining forces to reduce carbon emissions. 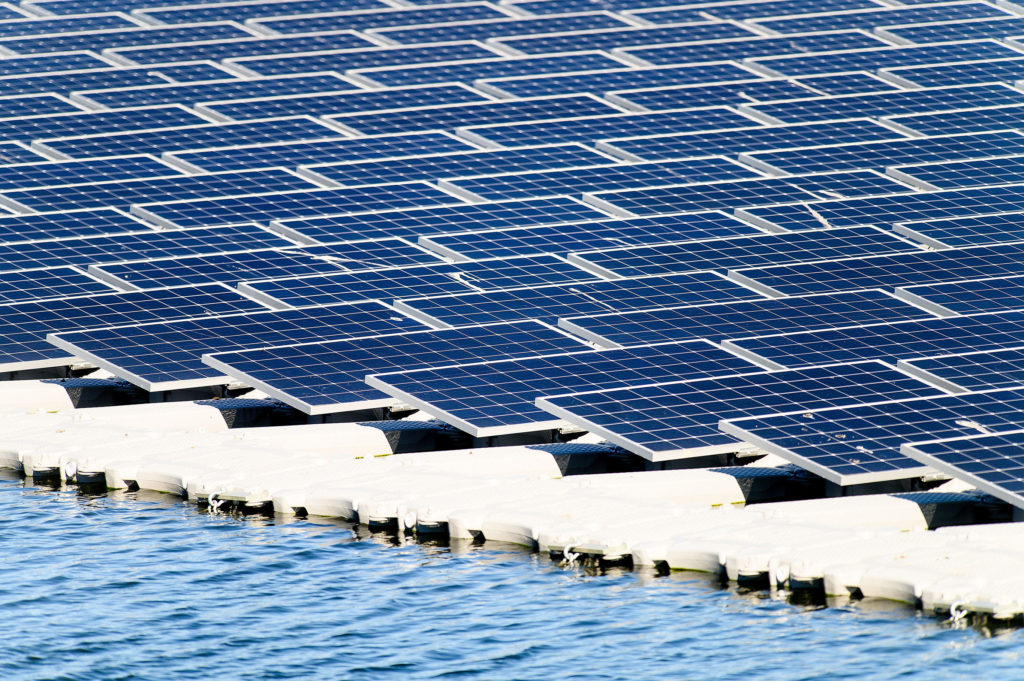 As part of the town’s plan to reduce greenhouse gas emissions, Windsor teamed up with Ciel & Terre, a solar innovator headquartered in France that has been expanding rapidly around the world. Ciel & Terre’s floating design keeps the solar array cool, enabling it to generate more power than a land-based system. The company’s LEGO-like configuration makes projects easy to assemble and expand, and they can withstand wind, rain, and snow. Typically, solar farms require large expanses of land—a barrier in locales where land is limited (such as Japan), or expensive (such as California’s agricultural regions). 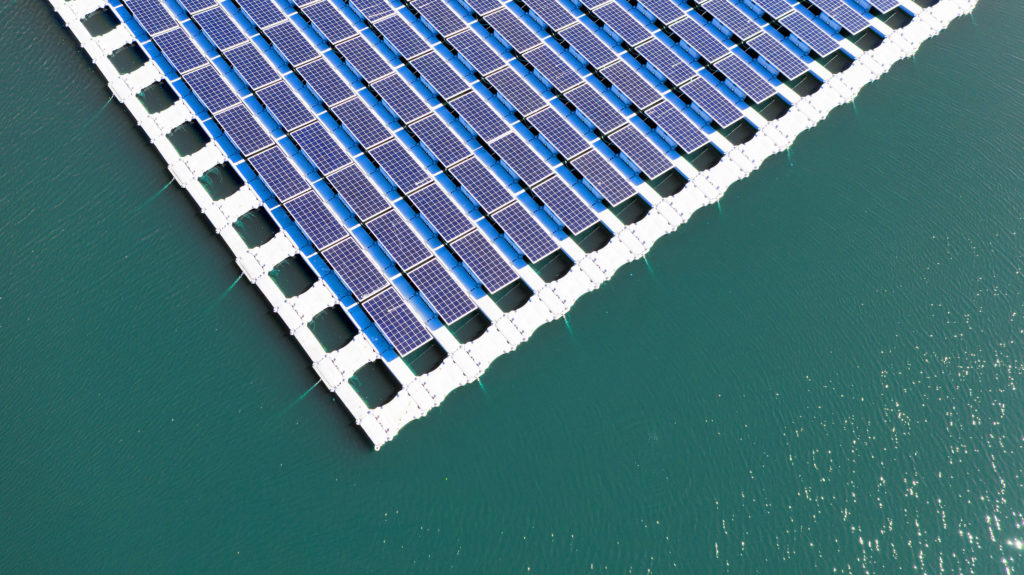 “Municipal water districts, utilities, farming operations, including wineries, want to adopt solar without having to use valuable land,” says Bertrand Colin, Chief Operating Officer of Ciel & Terre USA, Inc. The company operates in more than two dozen countries, and its 180 floating solar farms have helped avoid 510,000 tons of CO2 emissions—equal to the annual emissions from more than 100,000 cars. Colin foresees growing interest for projects in California because of the state’s goal of producing only carbon-free electricity by 2045. 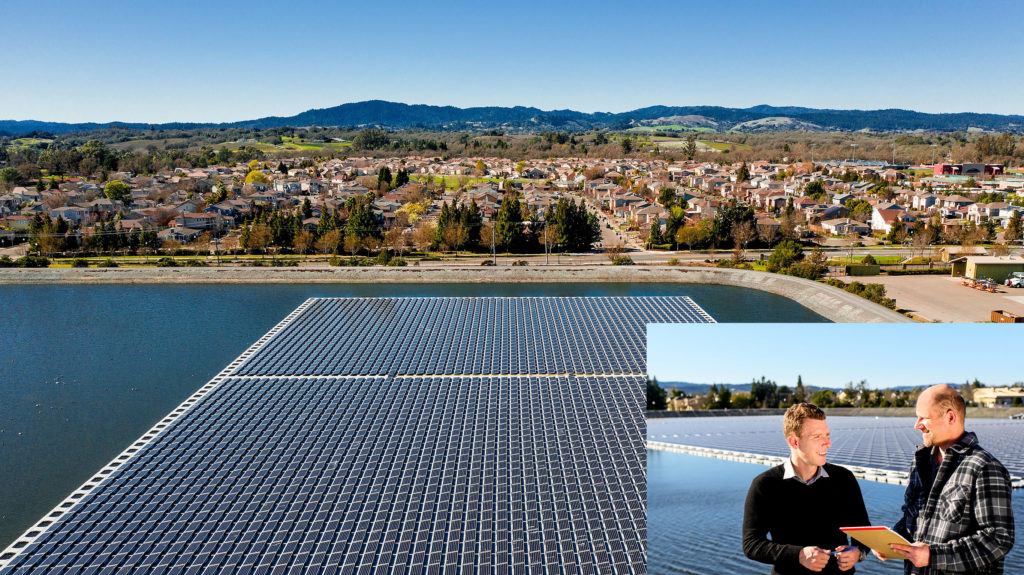 The town of Windsor made an ambitious commitment to lower greenhouse gas emissions through environmentally conscious development, promoting electric vehicle and energy efficiency, and by powering buildings and facilities with renewable energy. As it turned out, the water treatment plant accounted for nearly 40 percent of the town’s greenhouse gas emissions. Beyond the positives of renewable energy and smart land use, the innovative floating installation provides benefits to the pond’s ecosystem biology by limiting evaporation, controlling algae growth, and reducing pond bank erosion by keeping water movement to a minimum. (Bertrand Colin and Garret Broughton, Engineer, Windsor Wastewater Facility)

Global renewable energy capacity is projected to grow by 50 percent between 2019 and 2024, led by solar. Ciel & Terre has ambitious goals for expansion. Colin says the company wants to supply three gigawatts of power from floating solar farms by 2023. One gigawatt is the equivalent of 3 million solar panels, or enough electricity to power a midsize city.

For Ciel & Terre, the critical success factors for scaling innovation globally include: partners with global reach and shared values, market specific expertise, patience when breaking into new markets, and the ability to leverage early adopters in a new market.

The Future of Urban Mobility

Technology is changing how the world moves. It’s time to rethink what that means for companies and city centers.

Treasury is Changing. Salesforce is on Top of It.

How Salesforce's corporate treasury is meeting the challenges of the evolving role of Treasurer.

Before expanding overseas, tech companies should consider these seven tips.

Even big companies can be agile, but you need to take risks.These strategies can help.

Discover more about Bank of the West Corporate and Commercial Banking.